I just finished reading Sol Stein’s excellent book, Stein on Writing–A Master Editor of Some of the Most Successful Writers of Our Century Shares His Craft Techniques and Strategies. I found myself marking passage after passage, “This will be great to teach my students in my feature article writing class,” or “Wow, that’s a real encouragement to me,” or “I never thought of it that way before.”

Born in 1926 and now 88 years old, Sol Stein founded the book publishing firm of Stein and Day in 1962 which operated until 1989. During his tenure there, according to his website, Stein “edited and published some of the outstanding writers of the 20th century, including James Baldwin, David Frost, Jack Higgins, Elia Kazan, Dylan Thomas, Lionel Trilling, W. H. Auden, Jacques Barzun, and three heads of state.”

The author I have spent more time editing than any other is Elia Kazan, winner of two Academy Awards and director of five Pulitzer Prize 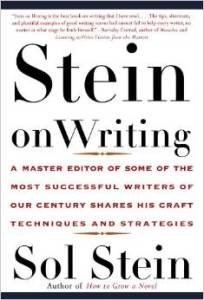 plays who turned to fiction and became a number-one bestselling novelist. In his autobiography Kazan said, “I was now in a new profession. My publisher Sol Stein was my producer, and my editor Sol Stein was my director. . . . He saw quickly . . . that I delighted in saying the same thing over and over, thereby minimizing its impact (‘One plus one equals a half,” Sol would say’).” (205)

Throughout this book, Stein offers advice to writers of both fiction and nonfiction on the basics of plot, pacing, dialog, characterization, and just plain how to be a better writer and get noticed by editors. To flesh out the concepts he teaches, Stein uses anecdotes from his editing of great writers and from working with students in his classrooms. Speaking of his advice to Kazan:

Eliminating redundance was an important factor in [Kazan’s] novel The Arrangement remaining number one on the bestseller charts for thirty-seven consecutive weeks. . . . Catching “one-plus-ones” is a function of what is called “line editing.” Shouldn’t writers rely on editors to catch things like that? The hard fact is that editors do a lot less line editing than they used to. If a novel requires a lot of line editing, it is less likely to be taken on by a publisher, who has to consider the cost of editing. Which is why it is incumbent upon writers to become, in effect, their own editors. (205-206)

I know, I know. You want to be a writer. And I do know how difficult it is to see the forest for the trees. And, yes, you do indeed need readers in a critique group, you need editors and copyeditors who will see things that completely escape you. But here’s the deal. Write that article or essay or book and then let it simmer for awhile. Go away from it. Let others read it. Reread it yourself–slowly, carefully, out loud. If you’re fortunate enough to get published, editors and copyeditors will still bleed red ink all over it (or at least Microsoft Word comments), but it won’t be because you didn’t do your job.

The biggest difference between a writer and a would-be writer is their attitude toward rewriting. The writer, professional or not, looks forward to the opportunity of excising words, sentences, paragraphs, chapters that do not work and to improving those that do. Many a would-be writer thinks whatever he puts down on paper is by that act somehow indelible. . . .

Judith Applebaum quotes Hemingway as saying to an interviewer, “I rewrote the ending of A Farewell to Arms thirty-nine times before I was satisfied.” Asked what stumped him, Hemingway said, “Getting the words right.”

Of the most successful authors I have worked with, I can think of only one who fiercely resisted revising. . . .Unwillingness to revise usually signals an amateur. (277)

Sure, we all want to be published. Sure, we’re in a hurry to get our words out into the world. But let’s make that writing, when published, something of which we can be proud.

Like Hemingway, let’s take our time getting the words right.