As I continue to write about editors and editing, I came across some very interesting insights in Jack London‘s masterful work, Martin Eden. Written as a thinly veiled autobiography, the story follows a low-class man and his desire for self-improvement in order to impress a high-class woman with whom he has fallen in love. He reads voraciously; learns language, grammar, and syntax; and teaches himself manners, politics, and philosophy. Eventually, he decides to become a writer–after all, he has many stories to tell from his travels around the world as a sailor.

Alas, every story he sends in is rejected and returned in what we would call the SASE (self-addressed stamped envelope). For years, he toils. He goes back and rereads the magazines to which he’s submitting to discover the “secret formula” for getting accepted. He spends hours and hours working at his craft, steadfastly refusing to bow to pressure from the woman he loves (and everyone else in his world) to just “get a job.”

He knows he’s a writer. He can feel it in his bones. He knows he has stories to tell, and he knows his stories are better than anything he’s reading in the magazines.

His money runs out. He barely survives. And the rejections keep coming. Martin begins to wonder:

He began to doubt that editors were real men. They seemed cogs in a machine. That was what it was, a machine. He poured his soul into stories, articles, and poems, and entrusted them to the machine. . . . There was no human editor at the other end, but a mere cunning arrangement of cogs that change the manuscript from one envelope to another and stuck on the stamps. (160-61) 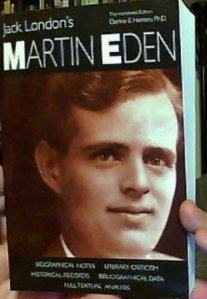 The chief qualification of ninety-nine percent of all editors is failure. They have failed as writers. Don’t think they prefer the drudgery of the desk and the slavery to their circulation and to the business manager to the joy of writing. They have tried to write, and they have failed. And right there is the cursed paradox of it. Every portal to success in literature is guarded by those watch-dogs, the failures in literature. The editors, sub-editors, associate editors, most of them, and the manuscript-readers for the magazines and book-publishers, most of them, nearly all of them, are men who wanted to write and who have failed. And yet they, of all creatures under the sun the most unfit, are the very creatures who decide what shall and what shall not find its way into print–they, who have proved themselves not original, who have demonstrated that they lack the divine fire, sit in judgment upon originality and genius. (322-23)

Ever felt that way as a writer? Ever felt like the editors either don’t exist or are simply cogs in machines that send out nothing but rejections?

As an editor, I do have to take a bit of offense that Martin sees me as “unfit.” But as a writer, yes, I have at times wondered if anyone with any taste receives–and rejects–my queries, my articles, my blood-and-guts pieces of creative nonfiction.

I’m sure many writers feel the same.

But let me put in a little bit of a plug on behalf of myself and my editor friends.

Eventually, Martin Eden does find the success he so long sought, but it comes at a price. He discovers the down side of fame and some of the hypocrisy in publishing, which begins his undoing.

Bottom line, Martin Eden teaches us that it takes persistence, faith in yourself, and hard hard hard work to be a writer.

Don’t give up. Don’t let the editors get you down. Realize that they aren’t “rejection machines.”

Nothing’s perfect, but work with us. Your great writing will find its home.