One thing (among many) that I love about our Professional Writing program at Taylor University is that the students get such a thorough and well-rounded education in the world of publishing.

Here’s what I mean: After the students in my “Manuscript to Book: How It Happens” class finished their copyediting passes on their manuscripts (which included style tags, along with general language and punctuation cleanup), they then took those manuscripts to the layout and design lab.

As part of the Professional Writing major, students are required to take classes in “Digital

Tools: Photoshop” and “Digital Tools: InDesign.” This makes them quadruple threats for any job in publishing because they know what it means to work with the words, but they also know what goes on in the design and typesetting phase where the books are created from the manuscript.

So each took one of the styled manuscripts, flowed it onto a template, and typeset a book. For three class periods we met in the layout and design lab and they worked on the manuscripts–deciding on fonts, chapter starts (recto only or recto/verso), leading, kerning, watching for widows and orphans (those random single words or lines at the top or bottom of a page), placing folios and running heads, and generally working to lay out a pleasing book within the page count target.

After they completed laying out the typeset pages, the teams chose one to turn into a PDF, and the PDF then moved on to the next team to do the proofreading pass.

In proofreading, the students work with the PDF tools to mark errors that either were

missed in the copyediting phase or showed up in typesetting. They first do a visual check of all the pages — looking that the margins are even, that the folios and running heads are placed correctly, that everything looks right. Only then do they go back and begin to read every letter on every page.

After a few days of this proofreading practice, we met together, looked at the PDFs on the screen, and talked about what they had noted as errors.

Again, this is one of the phases that takes a different kind of skill. At this point, no one wants the proofreader’s opinion of the book or the arc of the story. And really the proofreader should not be revising sentences. Instead, he or she should really only fix true errors (which can, indeed, happen at the sentence level; for instance, if there’s a dangling modifier, the proofreader should fix it). 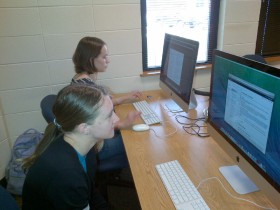 Proofreaders need to enjoy the hunt – searching for and correcting errors. It takes a special “eye” to do this, one that can be trained with practice. (I recall many years ago when I was doing freelance proofreading on galleys, the editor at the publishing house would often say, “I can’t believe you found those errors!” I took this as a compliment.)

As our “final exam,” the students went back to the styletagged manuscripts and learned how to create ebooks.

So there we have it. My students took manuscripts and turned them into books. Now they know how it happens! They felt that actually working through the steps as would happen in a real publishing house had been extremely valuable in the learning process.

4 thoughts on “From Manuscript to Book: As It Happened (Typesetting and Proofreading Phase)”