We have cleaned up our share of things in the basement—from the leftovers of previous owners to “water, water everywhere” (see my blog post from March 2010). This last week, however, we had a massive oil spill, maybe not the Exxon Valdez, but it seemed close.

Let me back up and explain something, especially for my non-country friends. In order to have heat out here in the country, many homes have those submarine-like containers in their yards that hold heating oil. This oil gets pumped into the house and, voilà, heat. I had seen those but never thought to wonder what they were until we were looking for homes here in the country.

Our home is equipped with a similar tank, smaller, and . . . in our basement. The big oil tanker truck pulls up to the side of the house, sticks the hose into a pipe on the outside, and sends the oil into the tank. Several hundred dollars later, we have a tank full of oil and heat for a few months, if not for the whole winter.

The first time we had oil delivered, the delivery guy came into our house to assess our drum-inside-the-house situation and give us our first lesson in how to have heat in the country in the winter. He confidently told us that the tank was so old that “they don’t make ’em like that anymore” and the gauge on the top that would tell us when we’re running low was broken (of course) and could not be replaced because “they don’t make ’em like that anymore.”

“How will we know when we’re out of oil?” my husband asked. 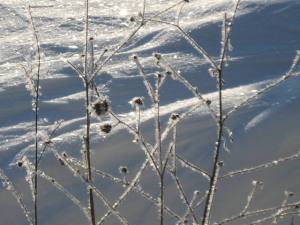 And of course we did manage to run out of oil deep into that next December as the wind whipped across the fields and the vents only gave us cold air.

So we called the oil supplier who trundled up in his huge tanker truck, backed into our driveway, and began to fill the tank with oil. Actually, our first oil spill occurred then, albeit much smaller. The guy in the oil truck apologized profusely that he had let the tank overflow—he had seen it through the basement window but the gauges on his truck read differently. It was fine, really. The overflow was easily cleaned up with a couple bags of cat litter and a cold couple hours of airing out the house.

Definitely a bit more of a mess than water. And more slippery, which I discovered when I stepped into a puddle to rescue a box, only to have both feet go right out from under me, landing with a plop on the corner of another box and into the oil. (I have the lovely black-blue-yellow-green-purple mark to prove it. Oil “slick” is not a misnomer.)

My husband turned off the valve to keep any more of our precious (and expensive) oil from draining all over the floor and we began the nasty cleanup process. We sent our son to buy out all of the cat litter at Wal-Mart (he got 30 bags—sorry to any of you who might have shopped for cat litter later that day) and the next day we got bags of the stuff auto repair garages use for soaking up oil from their floors (it’s called “Oil Dri”—imagine that!). We spread the bags over all of the oil. Today, we were able to begin the dusty process of sweeping it up, but it worked! All traces of the oil are gone.

And I’m so thankful for a husband who can manage to create a fix—even for things that “aren’t made like that anymore.”

We’re warm and dry once again.

A little sore, a little tired, but warm and dry.